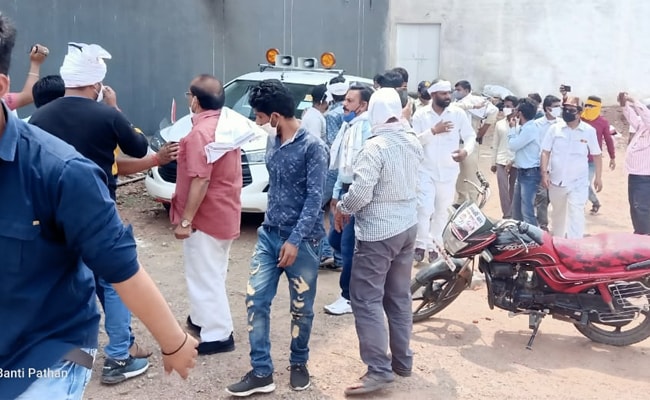 A day before voting for bypolls in Madhya Pradesh’s Damoh, Congress candidate Ajay Tandon alleged that an SUV belonging to the ruling BJP transported a large amount of cash to lure voters.

Congress workers alleged that an Innova SUV carrying a large amount of cash was found at a hotel in the district’s Shyam Nagar Colony , where some BJP leaders were staying.

In a video shared on social media, Mr Tandon, who stood near the SUV with his supporters, claimed he looked inside the SUV and saw “lakhs of rupees”.

The Congress said they have informed the local administration and the police. The party alleged that the police, instead of seizing the car with cash, allowed it to go away and manhandled protesting Congress workers.

The Congress has filed a complaint with the Election Commission. Former Chief Minister Kamal Nath, in a video message, said people caught a vehicle laden with money kept for distributing to voters.

“I want to give a clear message to the police and administration that after tomorrow, another day comes. Respect your uniform, respect the oath you have taken. The BJP’s money and power won’t win in Damoh, whose voters can’t be bought,” Kamal Nath said.

Senior BJP leader and cabinet minister Bhupendra Singh said it was “a drama by Congress”.

“Nothing was found inside the vehicle and the vehicle was checked properly. Congress is losing badly. People would give a befitting reply to Congress,” Mr Singh said.