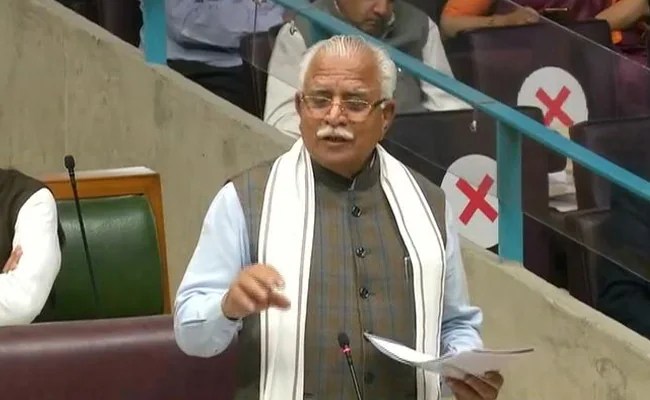 Haryana Chief Minister Manohar Lal Khattar on Thursday said that he was closely monitoring oxygen supply and pointed out that the systems put in place were working well and other states too were being given stock as per the quota fixed by the Centre.

Mr Khattar, who was responding to questions on the COVID situation and availability of liquid medical oxygen supply, said the state has been in touch with the Centre and has briefed officials in this regard.

The chief minister also said that as per the quota fixed by the Centre, 140 metric ton (MT) oxygen per day was being supplied to the national capital and added that Delhi Chief Minister Arvind Kejriwal called him up in this regard and said their position was better now.

Oxygen plants in Haryana have a capacity of 270 MT, out of which the Centre has fixed allocations for Delhi at 140 MT per day.

Coronavirus cases in Haryana have also witnessed a sharp increase during this month and demand for medical oxygen has also gone up, officials said.

Mr Khattar, who was interacting with reporters after a meeting of the state cabinet here, said that he also had a telephonic conversation with Prime Minister Narendra Modi on Wednesday evening, whom he assured that he was himself monitoring the oxygen supply issue.

He said that Prime Minister Modi stressed that all systems should be maintained and he assured him of that.

The prime minister said that this pandemic has engulfed the entire country and the world and everyone was together in this fight, he said.

He said that Delhi, which is getting 140 MT oxygen per day from Haryana, was on Thursday given an additional 30 MT to meet their needs.

Haryana is also giving 20 MT oxygen per day to neighbouring Punjab as per their quota, even as the state is also keeping 20 MT reserve to meet emergency uses, he said.

About his conversation with the Delhi chief minister, he said, “I received a phone call from Mr Kejriwal, he was thanking while stating that since yesterday evening their position is better and it should continue that way, to which I said that when a system is in place there should be no problem.”

The Haryana government had earlier denied allegations by several hospitals in Delhi on Wednesday that it was not allowing vendors to supply oxygen to them. It also denied Delhi Deputy Chief Minister Manish Sisodia’s allegation that an official of the Haryana government stopped oxygen supply to Delhi from a plant in Faridabad.

Mr Khattar, however, said that from a plant in Bhiwadi, Rajasthan, from where Haryana used to get 20 MT of oxygen supplies per day were not coming.

“I will speak to the Rajasthan chief minister about this,” he said. The supplies from Bhiwadi cater to some hospitals in Gurgaon and Rohtak.

Mr Khattar, meanwhile, assured the people on the availability of hospital beds, saying things were being scaled up wherever the need is felt.

In Gurgaon’s SGT medical college and hospital, he said an arrangement of additional 500 beds was being made.

He also said the Defence Research and Development Organisation (DRDO) will soon be setting up two dedicated COVID hospitals of 500 beds each in Panipat and Hisar.

About Haryana’s average COVID vaccine wastage, he said it was not more than 1 to 1.5 per cent.

On antiviral Remdesivir, Mr Khattar said, “We have enough stock, yesterday too we got 1,000 more injections.”