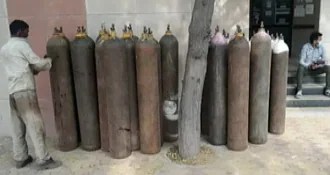 In the past few days, many hospitals and state governments have complained of oxygen shortage.

The Central government today informed the Delhi High Court that it had set up a control room for the nodal officers of various state governments to coordinate the management of oxygen supply — a matter that has turned contentious over the past few days.

Solicitor General Tushar Mehta also informed the court about Prime Minister Narendra Modi’s meeting today with many Chief Ministers, including Arvind Kejriwal, in which he had impressed upon all states to avoid interfering with the free transportation of oxygen.

“We can’t send paramilitary forces for the transportation of oxygen. Constitutionally it can’t be done. There might be a conflict between the state police and the central forces. The arrangement has been made to sort it at the bureaucratic level,” Mr Mehta said.

“This is done so that the Centre can intervene whenever there is any obstruction of transportation by local authorities.”

The court was hearing the plea of two Delhi hospitals which had approached it over the short supply of medical oxygen. In the past few days, many hospitals and state governments have sought the court’s intervention in ensuring the smooth supply of the gas. Some, like Delhi, have complained about the alleged diversion of their quota of supplies to other states.

The two hospitals to seek help today were Delhi’s Bram Health Care Private Ltd and the Tushar Thareja Research Centre. Bram Health Care told the Delhi Court that it had only three hours of oxygen left with 90 patients dependent on the supply.

Mr Mehta suggested these hospitals now approach the nodal officers first instead of moving the High Court every time. The Delhi government concurred.

“There is a faith deficit with the hospitals. Hence, they are moving courts but now there is a system in  place. Let hospitals first approach the nodal officer,” it said.

It informed the court that it had today received 350 tonnes of oxygen — the highest so far.

“Today there was a meeting between Prime Minister and Chief Ministers. Now things are moving in the right direction. Some time was needed for streamlining. We are in touch with the Railways over transportation,” it said.

The High Court then suggested to the state government that what was needed, instead of one nodal officer, was a team with many contact numbers.

Coronavirus, Oxygen Crisis Bengal: Oxygen Demand Will Rise To 550 Tonnes In A Week
39 mins ago