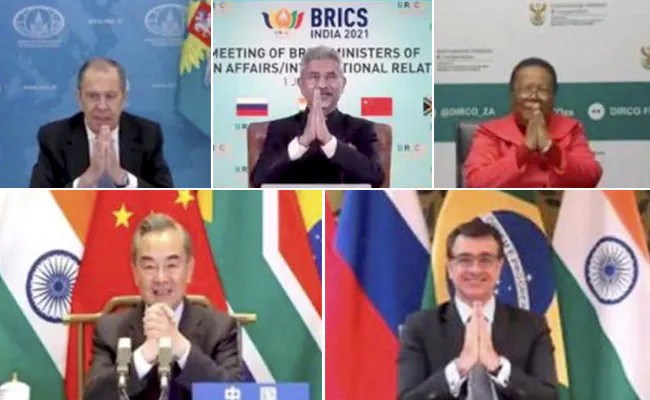 A joint statement issued at the end of the meeting echoed S Jaishankar’s comments.

The BRICS grouping strives for a just, inclusive and equitable multipolar international system that recognises the sovereign equality of all states and respects their territorial integrity, External Affairs Minister S Jaishankar said on Tuesday at a virtual meeting of the five-nation grouping that extensively focussed on combating the COVID-19 pandemic.

In his opening remarks, Mr Jaishankar said the BRICS (Brazil-Russia-India-China-South Africa) has come a long way from the first time its foreign ministers met in New York in 2006 but the principles that guide the grouping remained consistent over the years.

“We strive for a fair, just, inclusive, equitable and representative multipolar international system. It is one based on international law and the UN Charter, that recognizes the sovereign equality of all States, and respects their territorial integrity while displaying mutual respect for interests and concerns of all,” he said.

“It is only by conducting our policies in accordance with these principles that we can expect to bring about the change we desire,” he added.

The comments highlighting the need for respecting territorial integrity came in the backdrop of the border row between India and China in eastern Ladakh.

The meeting, hosted by India in its capacity as the chair of BRICS, also extensively deliberated on ways to deal with the coronavirus pandemic and equitable supply of vaccines.

A joint statement issued at the end of the meeting echoed Mr Jaishankar’s comments.

It said the ministers espoused their shared values of peace, freedom and rule of law, respect for human rights and democracy as well as a more fair, just, inclusive, equitable and representative multipolar international system, based on international law and the UN Charter, in particular sovereign equality of all states and respect for their territorial integrity.

The ministers also reaffirmed the principles of non-intervention in the internal affairs of states and the resolution of international disputes by peaceful means and in conformity with the principles of justice and international law as well as the inadmissibility of the threat or use of force against the territorial integrity or political independence of any state, it said.

“They stressed further the imperative of refraining from any coercive measures not based on international law and the UN Charter,” the statement said.

It said the ministers noted that the COVID-19 pandemic has, over the past year and a half, manifested itself as one of the most serious global challenges in recent history, wreaking immeasurable political, economic and social damage.

“The ministers reaffirmed that only together could the international community build resilience against future pandemics and other global challenges,” it said.

It said the ministers underlined the need for expeditious development and supply of COVID-19 vaccines, especially in developing countries, and called for further close cooperation between various stakeholders for a diversified vaccine portfolio.

Mr Jaishankar said the BRICS, has over the years evolved its unique model of engagement that is based on consensus and that its collective endeavour is also to ensure that global decision-making reflects contemporary realities.

“To this end, we have identified four key deliverables for our chairship — reform of the multilateral system, counter-terrorism cooperation, using digital and technological solutions to achieve SDGs, and enhancing people-to-people cooperation,” he said.

“I am very happy to note that we have made substantial progress on each of these areas in the past five months with the continued cooperation and support of our partners,” he added.

In his comments, Mr Wang expressed solidarity with India as it has been dealing with a severe second wave of the coronavirus pandemic.

“Let me begin by expressing my sympathy to India over the severe impact of the new wave of COVID-19 infections. In these trying times, China stands in solidarity with India and all BRICS countries,” he said.

Mr Wang said the BRICS now faces the profound and complex ramifications of the pandemic and changes unseen in a century. At the same time, he said opportunity may arise from the challenge.

He also commended India for its efforts as BRICS chair to enhance cooperation among the member nations.

“Together we will take solid steps to deepen BRICS cooperation in political and security fields and lay a strong foundation for this year’s summit,” he said.

In her remarks, Ms Pandor talked about the proposal by South Africa and India at the World Trade Organisation (WTO) seeking a patent waiver for COVID-19 vaccines.

“South Africa and India submitted a proposal to the WTO for a temporary waiver of certain aspects of TRIPS (Trade-Related Aspects of Intellectual Property Rights) to facilitate wider access to technologies needed to produce vaccines, for treatment and diagnostics,” she said.

The minister said there is a need to address the global gap of vaccine access to realise the ambition of “none of us are safe until all of us are safe” and leave behind the pandemic.

In his comments, Mr Lavrov also expressed Russia’s solidarity with India in its fight against the pandemic.