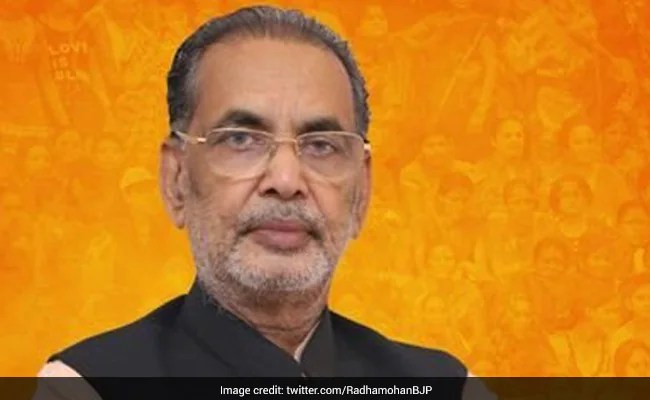 BJP vice president Radha Mohan Singh on Tuesday said the work done by the Uttar Pradesh government to manage the Covid situation has been “unparalleled”, days after murmurs of protest surfaced in the ruling party over the handling of the second wave of the coronavirus.

Speaking about his meeting with the central leadership, Mr Maurya on Tuesday said, “The meeting went on very well, and it was from the organisational point of view. In the 2022 UP Assembly elections, we are going to register a historic win. In that elections, we will cross the 300-seat mark (in UP Assembly).” There are 403 Assembly seats in UP on which elections are held.

Mr Santhosh had a dinner meeting with the chief minister on Monday. He also met state Law Minister Brijesh Pathak, who later said they discussed organisational matters and the 2022 Uttar Pradesh Assembly polls, but declined to elaborate.

In April, a “confidential” letter written by Mr Pathak surfaced on the social media, in which he had lashed out at the state health authorities, complaining that beds for coronavirus patients were falling short and ambulances took hours to arrive in the state capital.

The minister had not rejected the authenticity of the letter, which appeared to challenge the state government”s claim that it was on top of the situation.

Trashing charges of laxity by the Adityanath government during the second surge of COVID-19, Singh asserted that it was the BJP leaders and workers who rendered service to people at the height of the pandemic, while the leaders of other parties enjoyed “quarantine”.

He also made light of reports speculating a change in leadership in the state party organisation and described those as “a figment of some person’s imagination”.

Besides a few BJP lawmakers expressing resentment openly on the Covid-control measures, the major opposition parties — the SP, the BSP and the Congress — have slammed the government on the handling of the second surge of the pandemic and are planning to make it a major issue in the state Assembly polls, which are only months away.

“Generally, BJP review meetings take place twice a month, but this time, there was a gap due to COVID-19. At the meeting, the ”seva” work that we had done was reviewed. Apart from this, the party’s preparations for a possible third wave of Covid were also discussed.

“Earlier, when I came to Lucknow from Kolkata at the climax of the pandemic, the leaders of the rest of the parties were in quarantine, while it was only the BJP leaders and workers who were rendering service to people,” Mr Singh said.

He said the chief minister reached out to the last person in the society, went to villages and pointed out that even the World Health Organization (WHO) had praised the state’s handling of COVID-19.

“This pandemic was beyond everyone’s control. Despite this, the chief minister’s work was better compared to other states. The work done by Prime Minister Narendra Modi and Chief Minister Yogi Adityanath in the pandemic has been unparalleled. The work done by Modiji during the earthquake (2001 Gujarat earthquake) could not have been done by anyone else,” he said.

Asked to comment on the BJP’s performance in the recently-concluded Uttar Pradesh panchayat polls, Mr Singh said, “It is for the first time that the BJP won so many seats in the panchayat polls and the tally of the Samajwadi Party, which used to win (these polls), has come down considerably. We have significantly strengthened our presence in the zila panchayats and most of the Independents are with us.”

Months ahead of the 2022 Uttar Pradesh Assembly polls, the Bharatiya Janata Party (BJP) has decided to intensify its “Seva Hi Sangathan” campaign, under which party workers will reach out to those affected by COVID-19, extend help to them and also make people aware about vaccination.

This was decided at a meeting held at the state BJP office here on Monday, which was chaired by Santhosh and attended by the party”s vice-president as also the state unit chief, Swatantra Dev Singh, general secretary (organisation) of the party”s state unit Sunil Bansal and other senior leaders.

The state BJP said Santhosh held a meeting with the party office-bearers and elicited information about the work done under “Seva Hi Sangathan” and those on the completion of seven years of the Modi government at the Centre.

Mr Santhosh said BJP workers should reach out to those affected by COVID-19, extend help to them and raise awareness on vaccination.

At least one youngster and one woman worker of the party should visit each village and make people aware of the Covid vaccination drive, he said.