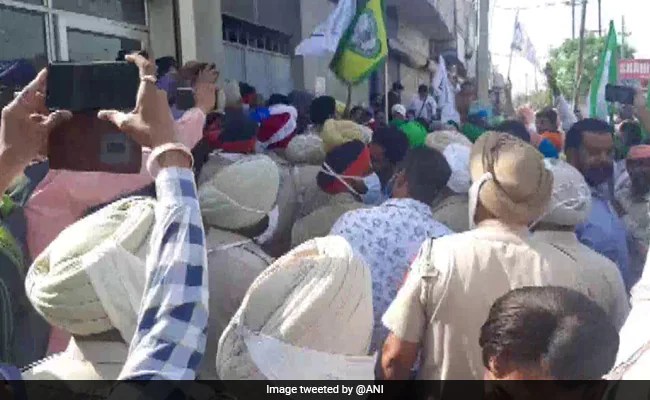 Several Punjab BJP leaders on Sunday staged a sit-in outside the official residence of Chief Minister Amarinder Singh to protest against the attack on party legislator from Abohar in Muktsar.

BJP MLA Arun Narang was allegedly roughed up and his clothes ripped off by a group of protesting farmers at Malout in Muktsar district on Saturday. The BJP leader had gone to Malout to address a press conference.

After meeting the Punjab Governor on Sunday morning, BJP leaders under the leadership of chief of the party’s state unit Ashwani Sharma headed towards the Chief Minister’s residence.

A few BJP leaders even took off their shirts as a mark of protest.

The protesters raised slogans against the Congress-led government in the state, alleging that law and order has completely failed.

“Does the opposition party (BJP) has no right to put forth its views,” asked Mr Sharma while condemning the incident.

“The voice of the BJP cannot be suppressed. We have never seen democracy being shamed this way,” he said while referring to the Muktsar incident.

“What was the fault of (Arun) Narang? He had gone there to highlight the failure of the state government,” said Mr Sharma.

“BJP leaders are being targeted. There is no sign of democracy in the state. We came here to tell him (the CM) that he is not capable of running the state and should resign,” said Mr Sood.

The Chief Minister had on Saturday strongly condemned the alleged attack on Mr Narang and also warned of strict action against anyone trying to disturb peace in the state.

BJP leaders in Punjab are facing the ire of farmers protesting against the centre’s three new agri laws for the last several months.

The agitating farmers have even disrupted programmes of the party leaders on a few occasions.