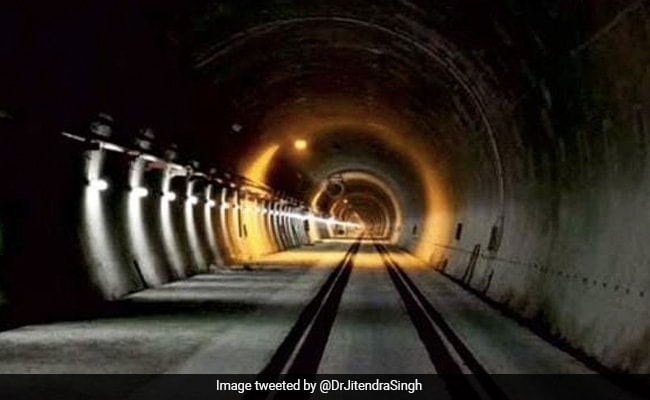 Navayuga sources said the ongoing work is expected to be completed within a few weeks.

The ambitious double-tube Banihal-Qazigund tunnel along the 270-km Jammu-Srinagar national highway built at a cost of Rs 2,100 crore is going through the testing and commissioning process and is likely to become operational in coming weeks, officials of the construction company said on Sunday.

The work on the 8.5-km-long tunnel started in June 2011 and, on completion, it would reduce the road distance between Banihal in Jammu and Qazigund in south Kashmir by 16 km.

It will bypass Jawahar Tunnel and Shaitan Nalla, which is prone to heavy snowfall and slippery conditions during winters and results in a bottleneck in the strategically important road linking Kashmir to the rest of the country.

“We are presently engaged in the testing commissioning process after the installation of all required equipment including ventilation and electric system,” Chief Manager of Navayuga Engineering Company Muneeb Tak told PTI.

He said they are working round-the-clock and the “people will get the good news soon”.

The official said the tunnel is trafficable at the moment and is going through the final stages before it is dedicated to the people of the Union territory.

Navayuga sources said the ongoing work is expected to be completed within a few weeks and the tunnel is most likely to be thrown open to traffic by the end of this month.

They said the company had also received a nod for the trial run of the traffic through the tunnel.

Tak said the tunnel is a masterpiece of engineering and has been constructed with the Austrian Tunneling Method.

“The tunnel has been built on the Build Operate and Transfer base system with a state-of-the-art exhaust system to remove gas and bring in the fresh air,” he said.

He said 126 Jet fans, 234 CCTV modern cameras and a firefighting system have been installed in both tubes of the tunnel.

“A corridor between two tubes after every 500 meters inside the tunnel has been built and this can be used in case of any emergency in either tube,” the official said. The existing road tunnel below the Banihal pass often witnessed traffic congestion that affected movement on the highway, the only all-weather road linking Kashmir with the rest of the country, due to its elevation of 2,194 m (7,198 ft) and limited traffic capacity.

The new tunnel’s average elevation at 1,790 m (5,870 ft) is 400 m lower than the existing Jawahar tunnel’s elevation, which would make it less prone to avalanches and fulfills the dream of expressway between Srinagar and Banihal.

The work on the tunnel was delayed for several reasons in the past 10 years including unexpected land condition inside the tunnel as well as issues related to local landlords and company workers.

Company insiders, however, attributed the difficult geographical terrain and inclement weather conditions during winters as the primary reasons for the delay in the completion of the mega project.