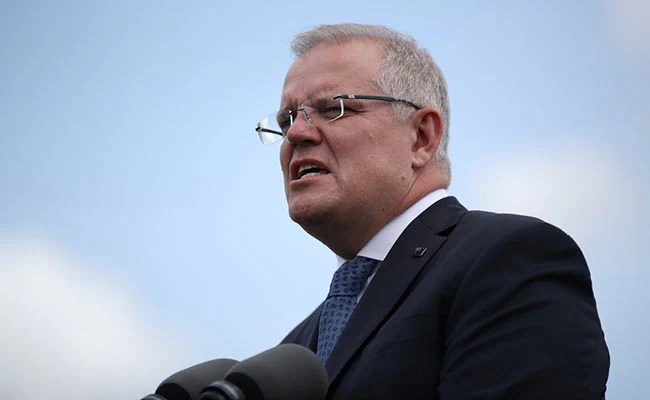 This was a necessary step to ensure that we can help more Australian citizens, he said. (File)

Australian Prime Minister Scott Morrison on Wednesday stood firm on his decision to halt flights from India in a bid to curb the COVID-19 infections and a possible third wave of the deadly contagion, saying positive cases have started to come down as a result of the pause.

The Australian government, for the first time in history, recently imposed a ban on its citizens from returning home, if they have spent time in India up to 14 days before flying back.

The government threatened to prosecute them with a possibility of five years of jail term or a penalty of 66,000 Australian dollars.

The move triggered a backlash with several lawmakers, doctors, civil societies and businessmen criticising the government for “abandoning” Australians in India and threatening the travellers with a hefty penalty and a jail term.

Mr Morrison, while speaking to reporters, defended the decision and said that the pause “is working” which means it will enable the government to get Australian residents and their immediate families back on repatriation flights.

”We’re already starting to see, as a result of the pause, the incidence of those cases at Howard Springs (quarantine facility) starting to come down. We’ve got a bit more distance to travel there,” Mr Morrison said.

“This was a necessary step to ensure that we can help more Australian citizens and residents get home, and at the same time, bring them home safely in a way that did not risk a third wave here in Australia,” he said, adding that a “good progress” was being made towards restoring repatriation flights.

Mr Morrison said he was not worried about the travel ban, asserting that the backlash would not impact the government’s relationship with India.

“There is a partnership effort with India to support them as they deal with this terrible crisis,” he said, adding that India is a great friend of Australia.

Mr Morrison said humanitarian support which includes oxygen containers, masks and respirators had already left Sydney and was now on its way to India.

On Tuesday, Mr Morrison said that the possibility of a prosecution was “pretty much zero”, indicating that it could be reviewed before it is due to be lifted on May 15.

“The sanctions are there, they exist but they will be exercised proportionately and responsibly,” he said.

“If everybody cooperates, then we can get things in a stronger position and that means we can start those repatriation flights again,” he said.

The move has left over 9,000 return travellers stranded in India, and according to a peak business body, the Australia India Business Council (AIBC), it could damage the business relations.

AIBC, in a statement, said that though it appreciates the gesture by the federal government providing relief material to India, it was concerned about the temporary border closure, imposition of fines and jail terms for those wanting to return from India.

“Such unprecedented measures and announcements are likely to have a serious impact on the Australian-Indian community as well as bilateral business and trade,” it said.

“Australian-Indians are educated, professionals and business owners who work hard and contribute seamlessly to the Australian economy,” it said.

It urged the Morrison government to take a pragmatic approach considering the sensitivities involved, and balancing health and economy, and more importantly the goodwill with Indians and with India.

According to ABC News, Ms Andrews supported the ban, calling it an “appropriate measure”. She said that she understands people’s concerns.

“These are temporary measures, we will be reviewing them,” the minister said, adding the government looks at the options available to support the Indian community here in Australia and to do its best for all Australians.