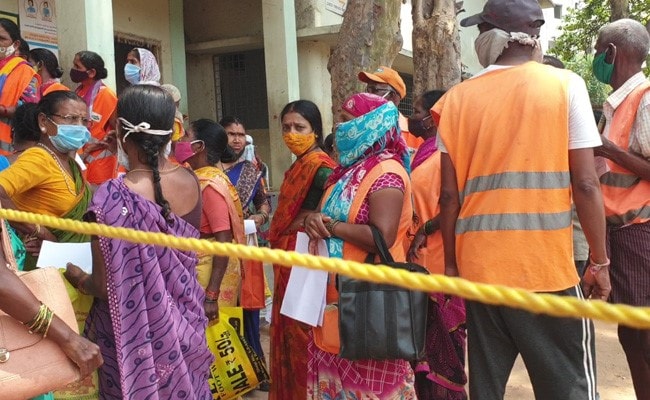 Vaccination centres in Telangana, where only five per cent of the general population has been vaccinated, are turning into potential hotspots for coronavirus. Huge crowds were seen at vaccine centre in Hyderabad, meant exclusively for frontline workers. Video footage from the spot showed no social distancing or Covid protocols were being maintained.

Earlier today, the vaccine supply ran out at Musheerabad, where a school was converted into a vaccine centre, NDTV found. Many people, who have been waiting for hours, had to return disappointed. A nurse at the Centre said the supply will come tomorrow.

Yesterday, Telangana joined several states in flagging a severe vaccine shortage, writing to the Centre that its stocks would last only for three more days. The stare asked for 30 lakh doses of vaccines for the next 15 days.

On Monday, state health director G Srinivas Rao told NDTV they were expecting 3.62 lakh doses by the end of the day.

Chief Minister K Chandrashekar Rao has said the ongoing “Tika Utsav” should be an opportunity to achieve 100 per cent vaccination for the frontline workers.

Last week, NDTV reported that less than 50 per cent frontline workers — like police and sanitation workers — have been vaccinated in the state.

Telangana is one of the 16 states that show an upward Covid graph as the second wave of the virus sweeps through the country. Besides Telangana, Maharashtra, Chhattisgarh, Uttar Pradesh, Karnataka, Delhi, Tamil Nadu, Madhya Pradesh, Gujarat, Haryana, Rajasthan, Punjab, Kerala Uttarakhand, Andhra Pradesh and West Bengal are seeing a surge in fresh cases.

Over the last 24 hours, Telangana reported 2,251 fresh cases of coronavirus, pushing up its tally to more than 3.29 lakh. The number of fatalities rose to 1,765, with six more deaths, the state government said.

The Greater Hyderabad Municipal Corporation (GHMC) accounted for the most of the cases reported – 355 new infections were detected in the area — followed by Medchal Malkajgiri (258) and Nizamabad (244), the government said.