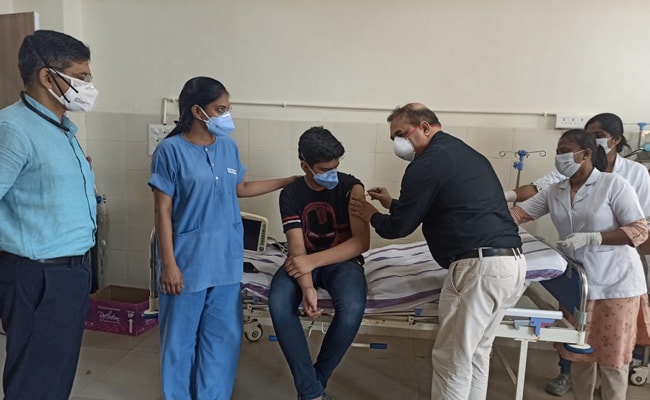 These Covaxin trials have begun in anticipation of a third wave that could leave minors vulnerable.

Twenty children of 12-18 years have been vaccinated till now as part of the clinical trial of Bharat Biotech’s Covaxin for this age group, officials associated with the Covid project at the All-India Institute of Medical Sciences (AIIMS) Patna have said. Over 100 minors have lined up for the trials till now, according to them.

These trials will be conducted on 175 children across the country with every centre carrying out 20 each, AIIMS Patna Superintendent Dr CM Singh told NDTV.

“After the trial’s first dose, administered following all formalities of RTPCR and blood tests, the second one will be given after four weeks,” said Dr Singh who is in charge of the trials.

“For the second round, registrations on the age group of 6-12 will begin on Tuesday,” he said.

The trials have been flagged off in anticipation of a mutated variant of Covid, that could leave children vulnerable.

Covaxin is a vaccine developed by the Hyderabad-based company in association with the Indian Council of Medical Research. It was one of the first two deployed by the Central government in its nationwide Covid inoculation drive.

The second Covid wave has had a devastating sweep in India over the past few months, with its effects receding only in the past few days. It had brought the health infrastructure to the brink of collapse; a large number of Covid patients died due to a lack of hospital beds and medical oxygen, among other things.

India, which had reported over 4 lakh daily cases in April, today logged 1.14 lakh fresh cases, the lowest in two months.