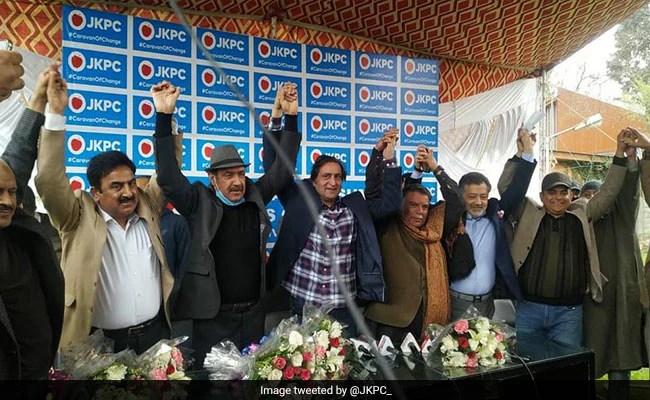 “We are very happy that they have joined us,” Sajad Lone said.

The Sajad Lone-led Jammu and Kashmir People’s Conference received a shot in the arm as three former legislators from the NC and the PDP joined the party in Srinagar on Monday.

Former minister Syed Basharat Bukhari, who recently left the National Conference, former MLA Peer Mansoor, who was associated with the People’s Democratic Party since its formation, and former MLC Khurshid Aalam, who had joined the PDP after retiring from services, joined the JKPC at a function here.

They were welcomed into the JKPC by party chairman Mr Lone and other senior leaders.

Mr Bukhari said he was happy and given respect in the NC but “could not get much done”.

“Many people came to me asking me to float a new party, but my conscience did not allow me to float another party as it would have led to the further division of votes,” he said.

“I think I am the first one from south Kashmir to join the JKPC. I am proud to be a part of this new team,” he added.

Speaking to reporters, Mr Lone said, “It is with great pleasure that we welcome the three senior leaders of Jammu and Kashmir into our party. We are very happy that they have joined us and our party will benefit immensely from their experience.”

He said the three former legislators were joining a political movement and expressed hope that in the coming years, the JKPC would “play a great and a pivotal role in contributing to the state of J&K, to the politics of J&K”.

“I am hopeful that this caravan of change will get stronger and we will try to play a constructive role in the extraordinary situation in J&K and navigate it through the troubled waters,” he added.

Asked about his party’s stand on the revocation of Article 370, Mr Lone said the special status of the erstwhile state of Jammu and Kashmir can be restored either in the Supreme Court or the parliament.

“We were among the first ones to challenge it (the revocation of Article 370) in the Supreme Court. That is one institution. The other is the people of India, which is the parliament. There is no magic wand other than these,” he said.

Mr Lone said the people of Kashmir have to engage with the people of India and cannot possibly “dream” of getting Article 370 back by not engaging with them.

“You have to engage with them. The ball is in their court and they will decide whether you get it back or not and we have to tell this to our people. The more you speak negatively or irritate them, the more you confirm that it won’t return,” he said.

Mr Lone said the reality is that “we have failed our people”.

“None among us has gone to talk to them, be it the ruling party or the opposition. I think there is scope and space and we can do things differently. It is a very difficult task, but not impossible,” he said.

Mr Lone also condemned the terrorist attack in Sopore earlier in the day in which a block development council (BDC) member and his personal security guard were killed and a civilian injured.

“We have always condemned violence in all its forms. It is a reprehensible act committed by the enemies of Kashmir,” the JKPC chairman said.

Militants opened fire on BDC member Reyaz Ahmad and his security guard Shafat Ahmad outside the municipality office in Sopore. They both died on the spot while a civilian sustained injuries in the attack, according to police.

Baidu’s Auto Venture To Invest $7.7 Billion Into Smart Cars Over Next Five Years
23 mins ago