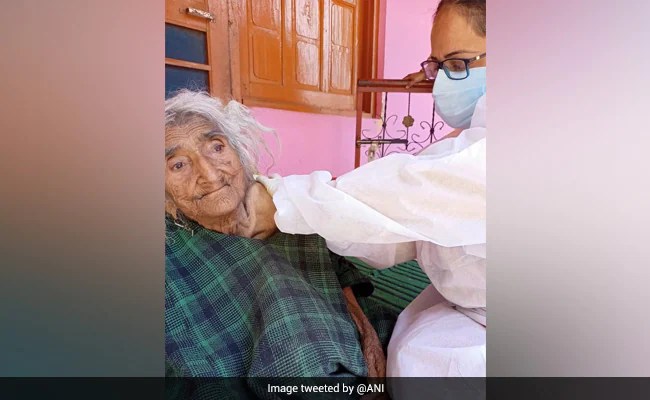 A 124-year-old woman from Baramulla district of Jammu and Kashmir was among over 9,000 persons who were administered COVID-19 vaccine in the union territory on Wednesday, officials said, but did not provide any proof of her age.

A total of 9,289 persons, including healthcare and frontline workers, were vaccinated against the disease on Wednesday across 20 districts of Jammu and Kashmir, they said, adding so far 33,58,004 jabs have being administered in the UT.

The officials said among the persons who were administered the vaccine on Wednesday was a centenarian woman from Baramulla district in north Kashmir.

Rehtee Begum, a resident of Shrakwara Block Wagoora, got her first Covid vaccine jab during a door-to-door vaccination campaign, the officials said.

Jammu and Kashmir’s Department of Information and Public Relations (DIPR) put out a tweet about the woman getting the jab and mentioned her age as 124 years.

#COVIDVaccination #jandkfightscorona 124 Years Old Rehtee Begum of Shrakwara Block Wagoora Baramulla gets her first COVID vaccine jab during door to door vaccination campaign, the DIPR said on its official Twitter handle and also posted a photograph of the woman getting the vaccine.

124 years old woman, Rehtee Begum gets her first dose of #CovidVaccine at kral mohalla Baramulla during door to door campaigning.#LargestVaccineDrive#JandKFightsCoronapic.twitter.com/v6YpN3ykcp

If the official statement is to be believed, then the woman happens to be the oldest surviving person in the world.

According to Guinness Book of World Records, Japanese woman Kane Tanaka is currently the oldest person living at an age of 118. The oldest person to ever live and the oldest person ever (female) was Jeanne Louise Calment (born 21 February 1875) from Arles, France, who died at the age of 122 years and 164 days old.

The official statement on Rehtee Begum’s age is based on an entry on the ration card of her son, which mentions her age as 124.

However, there was no official confirmation or corroboration of the woman’s age as there was no proof provided by the woman or her family.

We started door-to-door vaccination drive here and came across this family. She was willing to get the jab, which was a good thing. So, we administered the jab to her, Mr Ganie told PTI.

The officer said when the team asked her about her age, all she said was that she has crossed 100 years .

We saw the ration card of the family which listed her as 124 years old. Well, she surely seems to be 100-plus, but, I cannot certify her real age, Mr Ganie said.

The officer said the woman had no Aadhaar or election card and the family could not provide any proof of her age.

Though the UT’s Information Department mentioned the age of the woman as 124 years on its official Twitter page, it did not provide any proof.

In fact, the official daily bulletin on the status of COVID-19 cases and vaccination in the UT, which is also put out by the DIPR, mentioned that no jab was administered in Baramulla district on Wednesday.

Deputy Commissioner, Baramulla, Bhupinder Kumar was not available for comment despite repeated calls.